Doug Jarett: How one person can make a difference 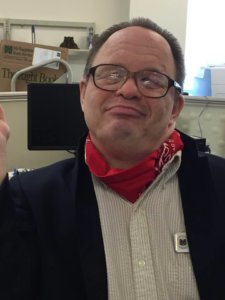 On August 18, 2019, Douglas Jarett, a 51-year-old mensch with Down Syndrome, died unexpectedly. Obviously, it is a tragedy when someone so young dies, especially when it is someone as beloved as Doug. However, I’m making Doug our “shabbat smile” because the impact of his life was enormous and he always made me and others smile. He really broke glass ceilings and made such a big difference in the world!

Doug had been living in the community with friends through supports from Judith Creed Horizons for Achieving Independence (JCHAI) and had worked for over 30 years at Ludington Library in Lower Merion Township. Thirty years ago, how many people with Down syndrome were in the workforce? Very few. He broke the mold.

Doug’s life has been a testimony to the impact of living an integrated life in the community: the inclusion made possible by his own sheer will, a terrific family and in large part by JCHAI.

Doug was so popular that he was like the mayor. His funeral was attended by over 200 people, including Township employees and members of the police department, who knew Doug from his many years as a Township employee. His co-workers at Ludington Library paid special tribute to Doug on Facebook, as did the Police Department. I really encourage you to see both of those posts and how many comments and “likes” they got because Doug was so beloved.

His older sister, Stacy Jarett Levitan, is the executive director of JCHAI. Indeed, he inspired her to go into the disability field. For full transparency, I am also on the board of JCHAI, I was privileged to know Doug, and it’s a great to be a part of the JCHAI family.

These are excerpts of Stacy’s remarks at Doug’s funeral:

This is certainly a speech I hoped I would never have to give. But we are all here to celebrate the frankly amazing life that Douglas David Jarett had and mourn the hole his death is leaving behind.

Doug was born in 1967 at a time when the common thing to do with people with Down Syndrome was to put them in an institution and wait for them to die. Mom and Dad consulted with the people they trusted most, including my pediatrician, and they decided to bring Doug home to grow up with me and then a few years later, Jennifer.

So, I have never really known a time in my life without Doug. And being Doug’s sister pretty much made you a celebrity. Doug had an outsize personality from the time he was born – whether it was tricking Mom into thinking he didn’t know how to walk for months while he was actually walking at school or coming up with ways to flirt with women that he met. And this was born from a level of confidence about his place in the world that he would never have had were it not for the great job my parents did in raising a child with Down Syndrome at home in a world that didn’t really do that.

I think Doug’s greatest legacy was to show the world that people with Down Syndrome could be just like the rest of us. He did everything our family did and many people have told me that Doug was the first person with Down Syndrome they ever met.

In fact, of many paths Doug trailblazed, he was one of the first people in Philadelphia with Down Syndrome to have a bar mitzvah. His speech started, “Today is my big day.” And a big day it was – for him and the Jewish community that learned about inclusion from Doug.

Doug’s experiences being part of JCHAI, too, enabled him to have a terrific life that had a huge impact on the community. He held a job at the library for over 30 years. He was included with his co-workers in all their work and family events. Doug was able to live a life of his choosing, which should be the goal for all people with disabilities.

What is heartwarming to me is that because of JCHAI he was able to establish a great community outside of his blood relatives – his friends from JCHAI and co-workers provided him with a life that was so independent of us that he often chose to do his own thing rather than be with us. And we all loved that because it is what anyone else would do – if you have plans with friends, you don’t dump them for your relatives unless it’s a big occasion. Doug had that choice always.

Doug was a perfect example to the whole community that someone with Down Syndrome could work in a real job, have his own life, and contribute value. That people with disabilities are valuable in themselves. In fact, we had a big surprise yesterday when the Lower Merion Police Department dedicated an entire Facebook post to Doug, concluding: “Our hearts are heavy with the loss of a friend and one of the sweetest and funniest people we knew. Rest in Peace friend!”

Obviously, Doug’s impact on my life is immeasurable. Literally every facet of my life is interconnected with Doug – my involvement with JCHAI started because of Doug. When I was practicing law, my pro bono work was always related to people with disabilities. My advocacy in government on behalf of people with disabilities is informed by my life as the sister of a person with a developmental disability.

But he was also my little brother. He loved to bug me and I loved to tease him back. As I said to one of the nurses in the hospital, he’s been bugging me for 51 years. And she said, “You wouldn’t have it any other way.” She was so right.

May Doug’s memory be a blessing always.

May every person with a disability get to live such a great life of value, respect and impact as Doug.

Next: Ollie Cantos Calls for Ripple Effect of Change by Building Alliances