View Resources for Veterans with Disabilities

New York, NY, May 14 – NBC’s new breakout show The Village explores relationships between family members and friends who become family in separate but interconnected stories. The ensemble drama also does not shy away from tackling important social issues, including immigration, teenage pregnancy and veterans returning from war with both physical and mental disabilities.

A major storyline focuses on Nick Porter (Warren Christie), a former 9/11 firefighter and Army veteran who returned home with PTSD and an amputated leg. One common criticism regarding the representation of veterans in television and film is the portrayal often is of broken veterans. Viewers will quickly learn that while Nick has several issues to work through, he certainly is not broken. In addition, too many characters with disabilities are portrayed through the pity framework; The Village does not fall into that trap and showcases what Nick can do. 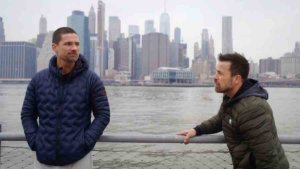 While it is important that the portrayal of Nick is complex and not focused solely on his disability, it also is important to note that Christie himself is not an amputee. This is something common in the entertainment industry, as actors without disabilities play more than 95 percent of all characters with disabilities. NBC hired former Marine Cpl. Jamel Daniels to help both Christie and Dominic Chianese, a fellow actor portraying a veteran, to authentically portray veterans. Daniels’ left leg was amputated following an IED attack in Iraq. Like Christie’s character, Daniels has dealt with PTSD and survivor’s guilt.

More than 1,600 military personnel lost a limb as a result of the wars in Afghanistan and Iraq. Furthermore, according to the U.S. Department of Veterans Affairs, between 11 and 20 percent of veterans today have PTSD. Therefore, in coordination with partners, RespectAbility has released a lengthy educational guide featuring resources for veterans with disabilities.

As Nick transitions back to civilian life, he is supported by a community of family and friends, as well as a support group for veterans, whose facilitator, Joe, is played by Kurt Yaeger, who currently is up for an Emmy nomination.

In real life, Yaeger is a below-the-knee amputee, the result of a 2006 motorcycle crash. He has continued riding his motorcycle as well as acting, including performing his own stunts and playing characters both with and without disabilities. RespectAbility caught up with him to chat about his most recent role on The Village.

A: Most professionals who have little to no experience with disabilities see a disability as a perpetual negative that one has to continually fight to overcome. So actors with disabilities are often written as characters who are not as complex or deep as they could be. Many storylines could be so much more rich, colorful and dynamic if our stories were properly researched and put down on the page.

A: Most creatives who have no experience with actors who have a disability don’t generally write disabled characters into significant roles. However, when they meet with an actor like myself, light bulbs begin going off in the minds of the writers and producers, because they realize these storylines haven’t been told in depth on tv and in film yet. So my advice is; meet with the working actors who happen to have a disability and bring them into the creative process, if you do, you will be covered in gold pixy dust and win major awards for diversity, inclusion and brilliant storytelling.

A: It’s hard for actors to be involved in the writing, which often happens long before they are even cast. Most actors aren’t good enough writers to actually help the process either. Writing is hard, very hard, and until you attempt to do it yourself, you have no idea how truly daunting it is. However, in the case of disabilities, creatives would do themselves a service if they brought in writers with disabilities to expand their own writers room’s voice. Bring in David Radcliff, Katherine Beattie, Allen Rucker, Gisselle Legere, who are all WGA writers and brilliant. Bring in Jenni Gold who’s a DGA director with a disability. Bring in Kaitlyn Yang who’s an amazing visual effect supervisor. Bring in actors with disabilities to meet Current and Development executives at the networks to be brought into the show character creation process from the ground floor. That’s how you start to make a change, by actually making a change.

Q: Tell us about your character. How did you prepare for this role? In playing this character, what thoughts or observations did you reach about who he is as a person? What drives him?

A: My character in The Village is a way to connect the main character, Nick Porter, to his past as a war veteran. This is important because PTSD and loosing a limb is something you can get help with, but you have to face the pain, fear and directly confront the horribleness of the past to move forward with your life. If my character develops, it will be in this sort of a capacity most likely.

Q: Looking to the future, any types of roles or genres that you are particularly interested in?

A: I love playing strong characters that are hyper-physical, well rounded and grounded in truth. I’m looking for my series regular role now, and I’d love to find something that was so intense, so hard to accomplish, that everyone would see my work as an actor forgetting the disability completely.

Shows like The Village are important in sharing military stories with civilians through storytelling. More importantly, by showing Nick as a successful member of society, viewers can see how people with disabilities, veteran or not, should be valued. The character of Nick also bucks trends because just 2.1 percent of scripted television characters in the 2018-2019 season have a disability – compared to 25 percent of adults in America today.

However, since so many characters with disabilities are played by actors without disabilities, having Yaeger on for several episodes is important to showcase authentic representation of people with disabilities on screen. Viewers connect with Yaeger, as well as the residents of The Village, bringing their stories to life.

Previous: Israel has a lot to celebrate!

Next: My Re-Bat Mitzvah: by Rachel Kunstadt