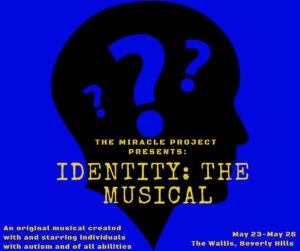 Beverly Hills, California, May 24 – In its premiere during the Evening of Miracles Gala, “Identity: The Musical” left audience members thinking about what being “perfect” actually means.

Written and performed by actors with autism and of all abilities, “Identity: The Musical” is set in an era where decisions are made by data, as “data sees everything,” leading to a person’s identity, including careers and spouses, being determined based on online habits, including social media check-ins and posts from their first 21 years of life. In this world of perfection, government has eliminated pollution, crime and poverty but also self-determination. This show imagines an alternative world in which everyone – regardless of ability – is forced to conform to pre-determined destinies based on this data collected from birth.

Many individuals with developmental disabilities and neurological differences are made to believe that their potential roles in society are limited and have been pre-determined by their diagnosis.

“Individuals with autism are so often labeled for what they cannot do instead of what they can do,” said The Miracle Project’s Founder Elaine Hall. “This musical is an allegory if everyone was labeled that way.”

“Identity: The Musical” is a project of The Miracle Project, which incorporates a groundbreaking and evidence-based methodology that integrates theater, film and the expressive arts to bring out the best in individuals with autism (verbal and non-verbal) and all abilities. Miracle Project participants with and without autism developed this concept, writing the script and music, as well as directing and acting, during a year-long course.

The company of 23 performers includes Domonique Brown (also “Please Stand By” with Dakota Fanning), Naomi Rubin (also Disney’s “The A Girl”), Spencer Harte, Garrett Mauldin and David Isaacman who all have been featured on Netflix’s “Atypical.” 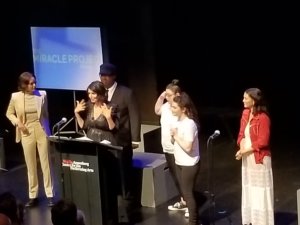 Prior to the premiere, Robia Rashid was honored for her  work transforming the way the world sees and understands autism through the creation of Netflix’s “Atypical.” “Atypical” actors, including three Miracle Project participants, presented Rashid with the award.

“‘Atypical’ gave each of us an opportunity to represent ourselves, to show the world that autism … makes us stronger,” Dominique Brown said.

Rashid highlighted that the unemployment rate for college-educated people with autism is at 85 percent. “The Miracle Project is providing people with employable skills and they’re getting jobs on ‘Atypical’ and other places. That is world-changing.”

Rashid went on to praise the Miracle Project actors for their professionalism. 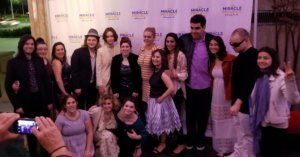 “Identity: The Musical” is presented in partnership with The Wallis as part of GRoW @ The Wallis, the umbrella for the center’s arts education and outreach programs.

“We are very proud to join with The Miracle Project to develop and present this important original production,” said Mark Slavkin, The Wallis’ Director of Education. “In showcasing the talents and perspectives of these wonderful artists, we hope to inspire our audiences to appreciate the gifts and talents everyone brings to the table.”

“The Miracle Project celebrates the gifts, strengths and talents of all abilities, and believes that regardless of ability, everyone should be able to decide for themselves the kinds of lives they want to lead,” added Hall. “We are proud to present Identity: The Musical with The Wallis and spark a critical dialogue as to the dangers of a breakdown in privacy and how, as a society, we too often pre-determine the destinies of those with and without disabilities.”

Ultimately, the musical’s message is simple: “What we need are human beings who treat us as human beings.”

“Identity: The Musical” performances are on May 24, 25 and 26 at the Wallis Annenberg Center for the Performing Arts. The 1:00 p.m. performance on Sunday, May 26th will be sensory friendly and include ASL interpreters. For more information, view: www.thewallis.org/identity.

Tagged as: The Miracle Project

Previous: A House of Prayer For All Peoples: by Shelly Christensen