BroadwayCon Puts the Spotlight on People with Disabilities

Broadway fans across the world traveled to dust off their tap shoes, put on their favorite costumes and sing along with their favorite show tunes with their Broadway idols for the annul BroadwayCon in January.

The panels were diverse as different panelists talked about actors, choreographers and playwrights—all with different ethnicities and gender orientations. Fortunately, people with disabilities were put on center stage on two panels about the importance of website accessibility and casting actors with disabilities.

BroadwayCon’s Industry Day had a brief panel that was called The Forgotten Fans. Jackie Lau, the Executive Director of Project Management at Situation Interactive, opened with a brief story of her friend named Maureen. Maureen, a long-time Broadway fan in her 60s, travels to New York City every year, and her favorite musical is The Phantom of the Opera. Maureen is also blind, making it hard to browse the Internet and make plans for Broadway trips. So, Lau knew that she had to solve that problem for Maureen and other fans with visual disabilities. “Disability is a human challenge, not a technological one,” said Lau.

Two clients that Lau & Situation worked with were the ticket website Broadway Direct and the Tony-nominated musical Mean Girls. Together, they strategized and tested how theatergoers with visual disabilities can go through their websites.

On the Mean Girls website, two of the problems were purchasing tickets and watching videos. First, the screen reader used to read the calendar, telling the fan with visual disabilities every single date and time the reader senses. Now, the reprogrammed screen reader gives the fans the phone number to order tickets immediately.Watching videos also was a challenge on the Mean Girls website because the video description was so broad. When describing the video that featured main character Regina George (played by Taylor Louderman, who was nominated for a Tony for her performance), it was only described as “Video Content.” It was frustrating because those who heard the description did not know what the video was about. Now, each video is described in detail. So now the video with Louderman is described as “Regina George talks about how she rejected Justin Timberlake.”

Lau is happy that Situation is starting to fix problems, so fans with visual disabilities like Maureen can have access to Broadway. They are looking at different fields of marketing to improve theatergoing for fans with disabilities.

The Theater Development Fund (TDF) plays an active role in making Broadway and off-Broadway theater accessible for people with disabilities. They arrange services for open captions and ASL interpreters, accessible seating for people with wheelchairs and audio description for those with vision disabilities. They also partner with producers to make arrangements for autism-friendly performances of Broadway shows that include quiet places and sound and lighting reduction.

“No one wants to feel left out of a performance,” said Lisa Carling, the director of the Theater Development Fund’s accessibility program. “If you miss a punchline or a dramatic statement, everyone else is included, but you are not.”

Broadway is for AnyBODY: Casting Actors with Disabilities

At Broadway is for AnyBODY, fans discussed how Broadway needs to include casting for everybody, including actors with disabilities. “If you see yourself or a connection to your character, you can do it with your body if it (your body) lets yourself do it,” said disability advocate & panelist Manja Netter.

Panelist and body advocate Harley Ann Kulp added, “If the directors can stop imagining the perfect ensemble, they can find more talent.”

One issue that was brought up was the casting controversy over Bryan Cranson, who is not disabled, in The Upside playing a quadriplegic man in a wheelchair. One audience member shares that an able-bodied man can only play a character with a wheelchair “if a scene required the character to walk.” Another audience member suggested that they could do the same scene with an actor that can’t walk, using computer-generation imagery to manipulate the walking.

“If you can CGI The Lion King,” stated the audience member, “you can CGI a disabled actor.”

People can take action about advocating for all people with different bodies, races and abilities to be on the stage. “When you see a certain person on stage,” remarked Kulp, “go on Twitter or by e-mail and thank the company. They will notice the message.” 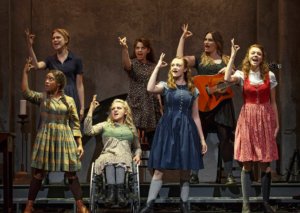 Disability is slowly coming to the Broadway mainstream. The 2017 production of The Glass Menagerie, starring Sally Fields, had the first actress with disabilities to play Laura—newcomer Madison Ferris, who has muscular dystrophy. Deaf West’s production of Spring Awakening had a Tony-nominated run on Broadway and featured an equal cast of deaf and hearing actors. The production marked the Broadway debuts of Academy-Award winner Marlee Martin, “Fargo’s” Russell Harvard and “Glee’s” Ali Stroker, who was the first performer with a wheelchair on Broadway. Stroker will star in the Broadway revival of Oklahoma this spring. 2014’s revival of Side Show, which is based on the lives of conjoined twins Daisy and Violet Hilton, featured Jordaana James and Josh Walker, two actors with dwarfism, in the ensemble.

The Tony-winning Dear Evan Hansen still is selling out to full houses every week on the Great White Way. The titular character, originally played by Ben Platt, lives with serious anxiety. Evan visits a therapist who tells him to write a letter to himself every day to build confidence. Evan also has a broken arm throughout the show, which he uses to get people to talk to him. Evan’s frenemy Connor has severe depression, anger disorder and drug addiction that becomes an important plot point in the show.

Platt won a Tony for his performance as Evan Hansen, and Mike Faist was nominated for Featured Actor as Connor. Throughout his run in the show, Platt had to go to physical therapy to get his body in shape. Platt, who has mild anxiety, also visited a therapist because the character of Evan Hansen is so mentally intense. During his Tony speech, he remarked to young viewers, “Don’t waste any time trying to be anyone but yourself, because the things that make you strange are the things that make you powerful.”

However, Broadway still has a long way to go for full inclusion of actors with disabilities. In its 15-year run, Wicked never had an actress with physical disabilities to play Nessarose, the Wicked Witch of the East, who gets around by wheelchair. The 2015 Best Play A Curious Incident of the Dog in the Nighttime had one of the first main characters on the autism spectrum on Broadway; however, they cast an actor without autism or any other disabilities for the role of Christopher. Additionally, Broadway’s recent productions of The Cripple of Inishmaan, Richard III, The Miracle Worker, Of Mice and Men andThe Elephant Man, whose main characters have physical and intellectual disabilities, had all of these lead roles played by celebrity actors without physical disabilities.

Despite these setbacks, the campaign of casting people with disabilities still marches on. “One-fifth of American society has a disability,” said Howard Sherman, senior strategy consultant for the Alliance for Inclusion in the Arts, “so what we must focus on is representing that in the stories that are told and making sure people with disabilities have the equal opportunity to be part of telling those stories.”

Broadway is starting to recognize people with disabilities. It may be a small start, but every piece of representation counts. BroadwayCon took advantage of its power of communication by reminding attendees that some fans and artists do have disabilities, and they should be recognized. However, there still is work to be done in casting, marketing and storytelling. Spreading the word, such as the panels at BroadwayCon, is effective because communication is the key to change. The more stories there are about disability and casting actors with disabilities, the quicker change will come.

“I really believe our industry is changing,” reflects Ali Stroker. “There’s so much curiosity around disability. I feel it every day of my life. There is something untouched here that I think audiences want to know about. There are so many fun stories to tell, with and without my chair. People are ready.”

Next: The Need for a More Inclusive Philanthropy: Lessons from A. Sparks