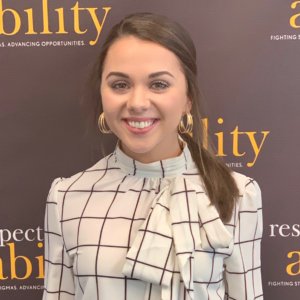 Vivian O’Neal was a Public Policy Apprentice in RespectAbility’s National Leadership Program for Spring 2019. RespectAbility is a nonprofit organization fighting stigmas and advancing opportunities for people with disabilities.

O’Neal pursued a Bachelor of Arts degree in Public Relations and Political Science from The University of Southern Mississippi. She has a strong background in public speaking and advocacy work for nonprofits that benefit children with neuromuscular diseases. Fundraising has played a large role in previous service work for O’Neal, specifically for the Muscular Dystrophy Association and Children’s Miracle Network (CMN) Hospitals. Last summer, she was awarded the Miracle Maker award for raising more than $5,000 for CMN hospitals.

O’Neal’s interest in disability rights originally stemmed from the birth of her brother Josiah, who was diagnosed with a rare neuromuscular disease called Nemaline Myopathy. Josiah’s disease falls under the umbrella of Muscular Dystrophy. Watching her brother’s struggles with his disease exposed her to the loopholes within the Americans with Disabilities Act and true accessibility. O’Neal’s interest later grew from Muscular Dystrophy to extend to the entire disability community when she became more involved with nonprofit and advocacy work. She hoped to learn at RespectAbility about the different aspects of disability rights such as employment rates and unequal pay.

O’Neal joined RespectAbility as a junior in college with hopes to take her knowledge back to her hometown of Hattiesburg, MS for her senior year and moving forward. She plans to apply skills gained from her Apprenticeship to continue working toward the ultimate goal of fighting stigmas and advancing opportunities for not only the disabled community but also for all minority groups.

Upon graduation, O’Neal hopes to move to Washington, D.C. to attend law school and pursue a career that places her in the midst of the political realm with hopes of one day potentially working on Capitol Hill.

O’Neal wrote several pieces during the Spring 2019 Apprenticeship. Check them out on our main website:

She also wrote 14 pieces for The RespectAbility Report: