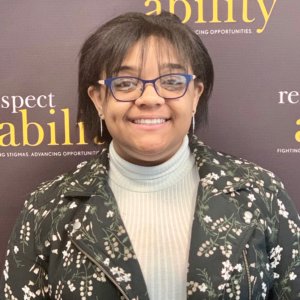 Samantha Stewart was a Communications Intern with RespectAbility for Spring 2019. RespectAbility is a nonprofit organization fighting stigmas and advancing opportunities for and with people with disabilities. As a senior in the Humanities program at Poolesville High School, she has participated in her school paper, the debate team and the drama club. Stewart always has been fascinated by film and has had a burgeoning interest in misrepresentation of marginal groups since ninth grade. Her desire to be a screenwriter only allowed her interest to grow, resulting in her finding RespectAbility and applying to be a high school intern. She wants to fight stigmas and advance opportunities for those underrepresented, especially people with disabilities. Stewart hopes that as a screenwriter, she can fight to change the culture of misrepresentation and underrepresentation in the media to empower those most affected.

Before joining RespectAbility, Stewart had experience in her journalism class writing about the importance of representation in film. She also currently is conducting her own research regarding the effects of the popular film Spliton stigma toward Dissociative Identity Disorder. She has had numerous experiences working with the homeless and people with disabilities and hopes that as an intern she can learn how to become a better ally.

Stewart hopes to double major in Film Studies and Psychology at the University of Southern California to understand the intersection of the two subjects. She hopes that the intersection of film and psychology will help her be a positive contributor to the film industry with a better understanding of not only film but also the effect of film on viewers, especially stigma. She hopes to attain an MFA in screenwriting before pursuing a career in film.

Beyond academics, Stewart loves to cook and wanted to be a chef at the age of eight. She also loves to listen to music, read, photography. She recently won a Key Award from the Scholastic Art and Writing Contest for her photography. Stewart currently is re-watching Haunting of Hillhouse and reading Sharp Objects by Gillian Flynn. Her favorite books are One More Thing by B.J. Novak and The Martian by Andy Weir.

Stewart wrote three pieces during the Spring 2019 internship. Check them out on our website: