Directed by Floyd Russ, “Zion” debuted at Sundance in 2018. Its subject, Zion Clark, was born with caudal regression syndrome, leaving him without legs. He was put up for adoption as an infant and grew up in the foster care system. The documentary short shows how he found a way to fit in by wrestling, something he began as a young child, competing against peers without disabilities.

“Wrestling has changed my life to the point where when I come to an obstacle in my life,” Clark previously told ESPN in 2016, “I instantly figure out a way to get past it and move on.” 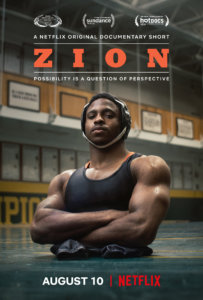 Russ, instead, lets Clark tell his own story and does not let the short become a film that exists just to inspire people.

“‘Zion’ by Floyd Russ is a beautiful and touching work that does what documentaries can do better than any other form — give audiences intimate access into the experience of others, in a way that makes us better for it,” said Simon Kilmurry, executive director of IDA.

“Zion” received the award during the 34thAnnual IDA Documentary Awards at the Paramount Theatre in Los Angeles. Floyd Russ served as Director and Producer. Carter Collins served as a Producer.