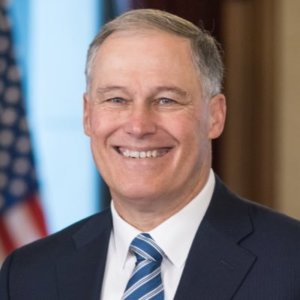 “Workplaces that welcome the talents of all people, including people with disabilities, are a critical part of our efforts to build an inclusive community and strong economy,” he said in a statement.

This proclamation follows a year of solid job growth that saw 15,871 people with disabilities getting new jobs in Washington State’s workforce last year. 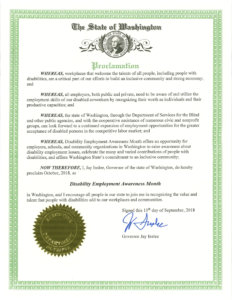 In total, there are 494,903 working-age Washingtonians with disabilities. That total includes people who are blind or deaf or have other visible conditions such as spinal cord injuries, as well as people with invisible disabilities including learning disabilities, mental health or Autism.

Of that number, 193,792 of them have jobs. That means the Evergreen State has a disability employment rate of 39.2 percent. According to RespectAbility, a national organization that fights stigma and advances opportunity for people with disabilities, Washington State now ranks 20th in the nation.

Washington State also is home to other innovative programs for people with disabilities. Project SEARCH is a one-year, school-to-work program that takes place entirely at the workplace. This innovative, business-led model features total workplace immersion, which facilitates a seamless combination of classroom instruction, career exploration, and worksite-based training and support. The goal for each program participant is competitive, integrated employment. SEARCH sites are scattered throughout the state at various employer partners that include Morningside Services, Provail, Microsoft, Starbucks and Alaska Airlines.  In Washington State, the SEARCH model is being expanded into new, cutting edge territory. The State Division of Vocational Rehabilitation, the University of Washington, Seattle Public Schools and PROVAIL are specifically working on expanding the model to have an even bigger impact on neurodiverse youth living on the Autism spectrum.

When people with disabilities are given access to the workforce, both the individual and the employers benefit. People with disabilities can bring new talents and ways of thinking to the table. In addition, they are more likely to be loyal to a company once they are hired. Companies such as JP Morgan Chase, Coca-Cola, UPS, IBM, Starbucks and Walgreens practice inclusive hiring and have had great success. Amazon is also a trailblazer when it comes to disability employment.