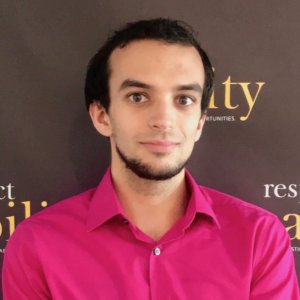 Zackary Tamimi is a Communications Apprentice in RespectAbility’s National Leadership Program. RespectAbility is a nonprofit organization fighting stigmas and advancing opportunities for and with people with disabilities. Tamimi himself has personal connections to the disability world. Several close friends of his are on the autism spectrum as well as one of his cousins. Subsequently, Tamimi hopes to work with RespectAbility in changing popular perceptions of people with autism and other disabilities.

Tamimi is a graduate of the University of Scranton where he completed a double major in Political Science and Communications. While in college he was a member of the fencing club, involved with Korean martial arts off campus and was secretary of the university’s Board and Game Club. After graduation, Tamimi moved to Washington, D.C., where he took a job with Autism Speaks until he decided to follow a calling to politics. He proceeded to work on two separate local-level Democratic campaigns in Maryland during which he served as both a canvasser and a communications intern.

Tamimi hopes to continue working in either the nonprofit or political world. Although he is still uncertain of his exact direction, he knows he wants to pursue a career that enables him to mobilize others around issues that need to be discussed such as climate change, wealth inequality and disability advocacy. A firm believer in democratic values, Tamimi realizes the importance of getting people to voice their concerns. Subsequently, his main goal is to continue advancing a career in political communications. He hopes to accomplish this by working on political campaigns in competitive swing states like Virginia, or by continuing to work with nonprofits focused on issues like the environment, human rights or disability.

In his free time, Tamimi enjoys cooking, reading, weight lifting, photography and tabletop games. He is a self-proclaimed dork and an avid Marvel fan. He has traveled the world and visited nations such as China and Russia. Tamimi hopes to someday have learned enough about his field to start a business in his hometown of Scranton, PA. He hopes he can give back to his community, which is badly in need of new ideas and development.

Tamimi wrote eight pieces for The RespectAbility Report. Check them out below:

Zackary Tamimi hopes to work to change perceptions of people with autism and other disabilities. His long term goal is to continue advancing a career in political communications.