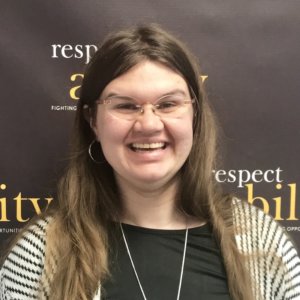 Heidi Wangelin was a Community Outreach Apprentice in RespectAbility’s National Leadership Program for Spring 2019, after serving as a Policy Apprentice in Fall 2018. RespectAbility is a nonprofit organization fighting stigmas and advancing opportunities for and with people with disabilities. Wangelin is a University of Washington graduate with two bachelor’s degrees in Culture, Literature and Arts as well as Disability Studies. She has worked with several disability advocacy nonprofits such as the Autistic Self Advocacy Network, National Council of Independent Living and University of Washington DO-IT Center.

Wangelin has authentic experience with disabilities. She lives with multiple disabilities, including non-verbal learning disability, autism, ADHD, three anxiety disorders and physical disabilities. Being a person with disabilities, primarily autism and anxiety, has been challenging, but she is determined to work as hard as she can to be a role model to other people with disabilities and a more compassionate person. Both in school and at work, she was often the only autistic woman.

Wangelin is originally from Seattle, Washington but recently moved to the Washington, D.C., metro area. She is a passionate activist for people with disabilities and began learning about disability self-advocacy as a teenager. As an adult, she has continued her lifelong learning about disabilities as evidenced by her degree in disability studies. Currently she is a contributor to the Autism Women’s and Non-Binary Network anthology What Every Parent Should Know about Raising their Autistic Daughter as well as featured on the NeuroQueer blog. Wangelin is also a finalist for the Pacific Northwest and West Disability Studies Symposium about women’s reproductive rights and the history of eugenics. She loves to read about disability justice and social justice as well as young adult fiction and poetry. Wangelin is also a published poet and is featured in the Celebration of Young American Poets Anthology Wisconsin 2004. Her favorite book series is The Ship Who Sang series by Anne McCaffery and The Speed of Dark. Wangelin also loves foreign languages and currently is learning Hebrew, Spanish and American Sign Language.

Wangelin wrote several pieces during the Fall 2018 and Spring 2019 Apprenticeships. Check them out on our website:

Previous: Poll: Most Jews Don’t Know Any Rabbis or Staff with Disabilities