Los Angeles, California – At a panel on inclusion at the Producers Guild of America (PGA)’s Produced By Conference last week, disability was excluded from the conversation until a question was asked by RespectAbility, a nonprofit organization fighting stigmas and advancing opportunities for people with disabilities, about disability inclusion.

Rachel Shane, Chief Creative Officer, MWM Studios, talked about bringing writers with disabilities into the writers’ room and that it had not been a focus before.

Nancy Solomon, Attorney at Law, Solomon Law, APC, said there must be more discussions about mental health issues and not be ashamed to bring them into the discussion.

When Nicole Brown, the SVP at TriStar Pictures with Sony, spoke, she brought a real-life case study to the room. When working on Baby Driver, the director said it was important that a deaf actor must play the deaf character to be authentic and “bring more depth to the film.” They put their trust in the director although they were not sure what to expect. 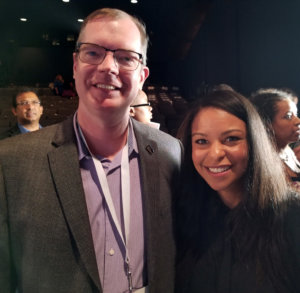 Brown then explained how it did not take long for them to realize that the director was right. She mentioned how the depth of CJ Jones’ performance and the authenticity that he brought was so much better than they could have gotten otherwise, and that it tested so much better with audiences. She said the studio executives were thrilled with the result and with his performance.

“The studio learned from supporting authenticity and leading into diversity that it was a great choice,” Brown told the room full of producers and studio executives.

“While the panelists agreed on the importance of inclusion of disabilities, it was really just ‘words’ until Nicole talked, because she was the one that actually had a story to share,” said Delbert Whetter, a board member for RespectAbility and Chief Operating Officer & Head of Business Affairs at Exodus Film Group.

After Brown finished, the panel’s moderator Gail Berman, who had just been elected President of the PGA the night before, remarked that the practice of casting people without disabilities to play roles with disabilities seemed to be declining. Berman then said she thought that was a good thing and is happy to see that. “I think the days of hiring a hearing actor for a deaf actor and other disabilities is ending,” she said, causing the room to erupt in the loudest applause of the panel.

With Hollywood striving to boost diversity and inclusion, opening the inclusion umbrella for America’s largest minority – the one-in-five Americans with a disability – is the right thing to do as well as economically smart given that the disability market is valued at more than $1 trillion. The success of films like Black Panther, Wonder Woman and Coco prove that diversity wins. According to Nielsen Research, consumers with disabilities represent a $1 billion market segment. When you include their families, friends and associates, that total expands to more than $1 trillion. Americans with disabilities represent the third largest market behind Baby Boomers and the mature market. 1.2 billion people on earth have a disability.

This conversation took place during a panel on “producing an inclusive industry: where do we go from here?” The focus was on #MeToo, predatory behavior, pay inequity and institutional bias, so much of the discussion was on the importance of how to move the needle and lock in sustainable gains for women in entertainment. However, panelists often brought up the importance of race and sexual orientation as well.

“To me inclusion is changing the default setting,” said producer Paul Feig of Feigco Entertainment. “It’s all about working to changing the default setting – before you automatically hire the guy, could a woman do this, could a person of color do this? The minute you change that, you grow the pool of people considered legitimate by the studio. The people are out there, it’s just getting them to be verified by the studios as ‘legitimate.’”

Inclusion is good for business. Shane pointed out the successes of Black Panther and Wonder Women, “There is actual evidence of financial benefit to diversity and inclusion.”

“When it affects the bottom line in a positive way, it starts to change people’s thinking,” Berman added.

Brown noted that when she brings in more diverse ideas, she now is being heard more. “And when you are heard more, you bring more.”

But she said it is not just about getting to the top for yourself. “Once you are there, you have to want to bring in more people for the executive ranks,” she said. “I need to make sure all types of people are represented on lists.”

“Part of the challenge is getting these people in the door,” Solomon added, saying it is important to go “out to the schools where there is diverse communities.”

“The Inclusion Rider can be anything from hiring crew and cast,” she continued. “Getting them in the door and soliciting them is the first step.”

Mike Farah, Chief Executive Office, Funny Or Die, stressed the need for it to start at the top (executives) and come from the bottom (interns). He used the work of LGBTQ activists as an example of people who have done it well.

“It’s incredible what the gay and lesbian community has been able to do through creativity to change that perception,” Farah said.

The disability community is learning a lot of lessons from the LGBTQ community, including how GLAAD works with entertainment professional to ensure positive, authentic portrayals – something that is needed for characters with disabilities as well.

Next: Jewish People Invited to Give Opinions on Disability Issues