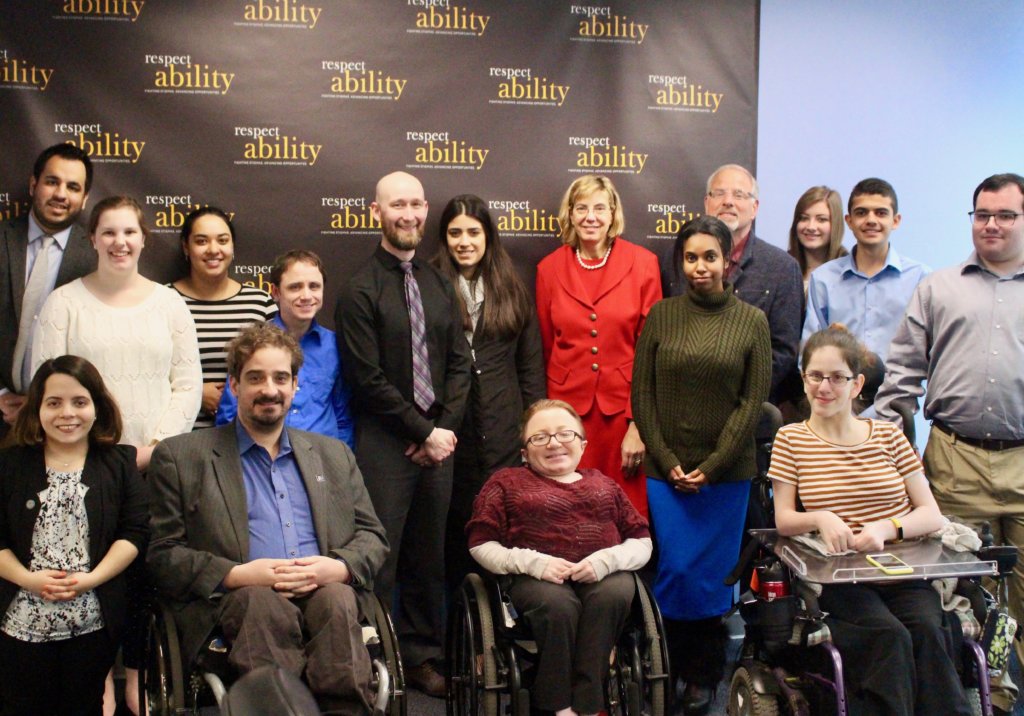 Rockville, Maryland, March 16 – In a presentation to RespectAbility staff and Fellows, Michael Murray spoke about the world of disabilities, employment opportunities and overcoming stigma as a person with a disability. Murray is the Director of the Employer Policy Team at the Department of Labor’s Office of Disability Employment Policy. He happens to have more than one disability and is passionate about advancing opportunities for people with disabilities joining the workforce.

Murray shared his experiences growing up with dyslexia as a child. He eventually learned to read and write thanks to his own dad. He spoke about how he saw his disability as a positive factor and his motivation to strive for success as a person living with a disability. His dad, who also had a disability, was very encouraging growing up. His father inspired him and served as a great role model; he was very accepting and loving toward him. He encouraged Michael to run because he knew that’s what he loved. Even though his had chronic fatigue syndrome, he joined Murray on his first 5k race.

Murray spoke about various approaches to obtaining a job as a person with a disability. In a cover letter or resume, avoid pity because pity prevents people from reaching their potential. “Show off the value you can add, not in spite of your disability, but in part because of it,” he said. Murray suggested that when people disclose their disability is completely up to the them.

When looking for a government job, Murray emphasized researching the agency one wishes to be employed with before applying for a job because the federal government is competitive. He suggests it is best to stand out, know the system, know the terminology, apply to apply to as many vacancies for which you qualify and to use askjan.org to find helpful information on how to obtain accommodations. Broadening and widening a job search is helpful, as well as being open to relocating if the opportunity is at hand. He says “go big or go home,” meaning don’t settle or limit one’s self to a single company or geographical area.

Murray also spoke about businesses that accommodate people with disabilities improve the bottom line of the business. He illustrated how inclusion drives innovation. People will buy more groceries if the doors open automatically, and they can carry them to their car more easily he explained.

Everyone is different and may not acquire a disability when they are born, but can develop one or more later on in their lives.

Diversity in the workforce is always a good thing for everyone. Murray believes that if people all have the same background, they will all come up with the same solution to a problem, but if diverse perspectives are included, the results are innovation, creativity new ideas and ultimately better outcomes.

RespectAbility is a nonprofit organization fighting stigmas and advancing opportunities for and with people with disabilities. This spring, 14 Fellows had the opportunity to learn from a variety of guest speakers. Learn more about the National Leadership Program and apply for the next cohort! Contact [email protected] for more information.

Previous: As Oksana Masters, a woman with disability adopted from overseas, wins U.S. Paralympic Gold, MacArthur Foundation paves way for other youth with disabilities in orphanages to have better future

Next: Rice 360 Gets $15 Million Investment from MacArthur Foundation; Will Be Inclusive of People with Disabilities