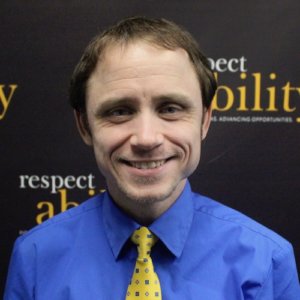 Ryan Knight was a Communications Apprentice in the National Leadership Program at RespectAbility. Born three months premature, resulting in spastic cerebral palsy, he gained a stutter at age three and learning disabilities later in life. A passionate writer, his goal is to write on behalf of the disability community.

Becoming involved in the disability community felt natural to him because he wants to help others with disabilities so that they will not struggle like he has. At Linganore High School in Frederick, Maryland, Knight was a member of Best Buddies, a club that pairs a person with a disability and a person without a disability to engage in social activities together. Living with a disability has not deterred Knight from reaching his professional goals so that he can create the life he wants to live. Knight has never given up and will never give up on his dream of helping others through the written word.

Before writing about issues affecting people with disabilities, Knight first wanted to get a college education and volunteer. At the age of 25 in 2006, he enrolled at Frederick Community College and majored in Human Services with a concentration in Developmental Problems. While at Frederick Community College, he volunteered at The Arc of Frederick County and The Arc at Market Street, nonprofit organizations that serve adults with disabilities in supported employment and provide respite care for adults with disabilities. Although he struggled in science and math classes, Knight never gave up; he just kept going like the Energizer Bunny until he finished classes. He was the first of his mom’s children to walk across the stage when he earned his associate’s degree in Human Services with a concentration in Developmental Problems in May 2012.

After taking classes in an Occupational Therapy Assistant program and realizing that was not where his talents lie, he returned to his first love – writing. Knight knew he wanted to write for a career, but he did not know what he wanted to write – until he made the choice to enroll at Hood College, which Knight says is the best decision he has ever made.

While enrolled at Hood College, Knight learned from skilled writers: a Hollywood publicist who has worked with Tom Cruise and Channing Tatum; a sports reporter who has written for The Washington Post, a Herald Mail news editor and a news reporter for The Baltimore Sun. He has focused on the disability community by creating an employment blog “The Discarded Eighty-Three;” the blog title refers to the then appalling statistic that 83 percent of people with disabilities were unemployed in 2016. The blog also helps people with disabilities to know that they have a voice that deserves to be heard just like the voices of everyone else in society. He also is a member of the academic honor society’s Delta Alpha Pi, a club that works to dispel myths about disabilities by spreading awareness of the community on campus.

Knight wrote nine pieces during the 2018 Spring Apprenticeship. Check them out on our website:

He also wrote four pieces for The Respectability Report: