Companies that do include people with disabilities, however, find it successful 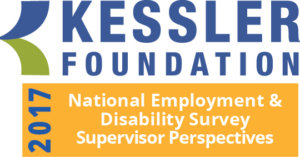 Washington, D.C., Oct. 17 – A new study, entitled the National Employment and Disability Survey Supervisor Perspectives and conducted by the University of New Hampshire, was released in the U.S. Capitol in honor of the National Disability Employment Awareness Month.

Findings from the study suggest several opportunities to engage employers about specific practices that supervisors find effective for improving their ability to employ or accommodate people with disabilities.

For example, most organizations use different training, accommodation and retention practices, most of which are effective for people with disabilities.

Many employers still are reluctant to hire people with disabilities for fear of the cost of accommodations. But according to Elaine Katz, Senior VP of Grants and Communications at the Kessler Foundation:

“When you give somebody the tools to do the job, they can do the job well, whatever that tool may be. So again, we’re really excited that this can provide some arguments and concrete evidence that when provider agencies go to make those relationships in the communities, with their business partners, they can say, you know, this is the data we have seen; let’s try it and see how it works for you.”

This 2017 Kessler Foundation Survey is the first national survey to look at the effectiveness of the practices used by employers when striving to recruit, hire, train and retain people with disabilities. The survey revealed areas of opportunity for even greater successes in the workplace.

The survey was administered to 3,085 supervisors from across the country who responded about their experiences in the workplace related to hiring, professional development, advancement and the provision of accommodations for applicants and employees with and without disabilities.

Regarding upper management, the survey has a finding worth highlighting:

“One is that when employers try to employ people with disabilities and use best practices, they succeed. The second is that most are not yet trying. It is critical to engage employers to find the best talent out there – which often can be people with disabilities,” she continued. “Indeed, Steven Hawking is unlocking the secrets of the universe from a motorized wheelchair. Billionaire developer Steve Wynn is blind. Shark Tank stars and business leaders Daymond John and Barbara Corcoran have learning disabilities.”

Jeanette Marquez is a Policy Fellow at RespectAbility, where she is helping to create an innovative Community of Practice in Long Beach, California. From Mexico, she has three deaf siblings with dreams and goals of their own. Because of them, she has decided to be an advocate for the rights of people with disabilities, specifically that society should be inclusive.

Next: The Tichenor Clinic: A Pillar of the Long Beach Community Focusing on Children with Disabilities From Birth