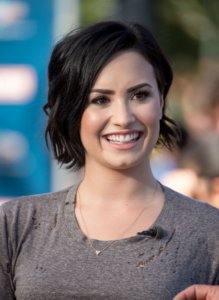 Lovato, 25, was diagnosed with bipolar disorder in 2011 while seeking treatment for an eating disorder, depression and their battle with self-harm.

“It’s important to speak up about the things you believe in, because your voice will be heard no matter what position you’re in,” they shared. “I just happen to be in a position where more people would hear my voice.”

Lovato’s career took off at a very young age. The child star from Dallas, Texas made their first television appearance on Barney and Friends at the age of 10 alongside actress Selena Gomez. In 2007 they auditioned for the Disney television movie Camp Rock as well as the Disney television series Sonny With a Chance. They landed both of the roles. In addition, in the summer of 2008 they began their “Demi Live Warm Up” tour as well as appeared on the Jonas Brothers’ “Burnin’ Up” tour.

In 2011 they announced they would be leaving Sonny With a Chance and took a hiatus from acting. They was diagnosed with depression, an eating disorder and bipolar disorder. It was also during this time that they began to share their story of living with mental illness with their fans and the world.

“Living well with bipolar disorder is possible, but it takes patience, it takes work and it is an ongoing process,” Lovato said in an interview with the Be Vocal Campaign. “The reality is that you’re not a car that goes into a shop and gets fixed right away. Everyone’s process and treatment plan may be different.”

Studies show many people within the Latino and other communities hide their invisible disability due to negative stigmas, but Lovato has chosen to spread awareness and reduce stigma surrounding mental health. It is because of their will to speak out and act as an advocate that Lovato is a wonderful role model to highlight for RespectAbility’s #RespectTheAbility campaign, which is shining a light on individuals with disabilities who are extremely successful in their chosen career.

On Sept. 23, 2017, Lovato was named a Global Citizens Ambassador of Mental Health. They received the Artistic Award of Courage at The Jane and Terry Semel Institute’s biannual Open Mind Gala, which highlights people who advocate for mental health awareness.

Our nation’s economy is strongest when it is inclusive of the value that diverse talent brings to the workplace. According to the National Alliance on Mental Illness, an estimated 10 million people live with bipolar disorder. When stars like Lovato speak openly about their experiences, the overall stigma often held against those with mental illness begins to lessen. Celebrities like Lovato are making a difference.

Previous: Cristina Sanz: First Hispanic with a Disability As Part of Ensemble Cast to Be on an Emmy Award-Winning Show

Next: Frida Kahlo, Self-Portrait Painter, Showcases Disability in Her Art