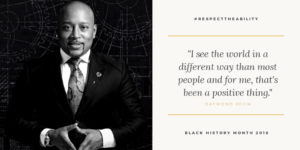 “I see the world in a different way than most people and for me, that’s been a positive thing.” – Daymond John

Rockville, Md., Oct. 2 – Growing up, Daymond John struggled in elementary school, where he was diagnosed with a general “learning disability” without being provided many resources or support. Today, John boasts unimaginable success as a multimillionaire and entrepreneur as the co-founder and CEO of FUBU and a shark on The Shark Tank.

John credits his dyslexia with setting him on his path to entrepreneurial success. “I see the world in a different way than most people and for me that’s been a positive thing,” he said in an interview with AOL.

When John went to school in the 1970’s, the public still lacked information on dyslexia, so children with the disability were given a general diagnosis of a learning disability, like John was. His math and science skills were exceptional, but his reading and writing grades were below average. The entrepreneur was anxious about his difficulty reading and writing until 1999, when he finally saw a medical professional who diagnosed him as dyslexic.

“It was like a light bulb went off. I finally understood why I struggled the way I did,” John said in an interview with AOL.

After co-founding FUBU, a casual clothing line, in 1992, John realized his highly visual mind was an advantage in the business world. While he struggled with reading and writing, he could map business plans in his head.

However, in 1999 technology and communication shifted to text and email, and John went through media training for and struggled to read from Teleprompters. This made things difficult for John as an entrepreneur and TV personality, which led to a decrease in his self-esteem, despite running a highly successful clothing line. When a friend noticed John followed directions inversely, he suggested that John may have dyslexia and should see a professional for an official diagnosis. Since then, John has been transparent about his reading and writing difficulties with his colleagues, at speaking engagements, in interviews and via social media.

“I’m dyslexic too and look at where we’re at. You can do it too. #SharkTank,” John tweeted on Sunday night. He inspired another celebrity, Johnathon Scharch, to tweet that is dyslexic and generated positive response from some of his more than 600,000 followers.

Since then John has developed a serious hearing disorder. However, he takes advantage of new breakthrough innovations in hearing aids that when combined with his iPhone enable him to hear. He says that he lost hearing because he listened to an incredible amount of loud music in his youth. However, with assistive technologies, he never misses a beat in business or on TV.

Fully one-in-five Americans have a disability and polls show that most of them want to work. Yet 70 percent of working-age Americans with disabilities are outside of the workforce. John is proving that people with disabilities, with the right support, can change this statistic.

Next: Richard Branson: Dyslexia is an Opportunity