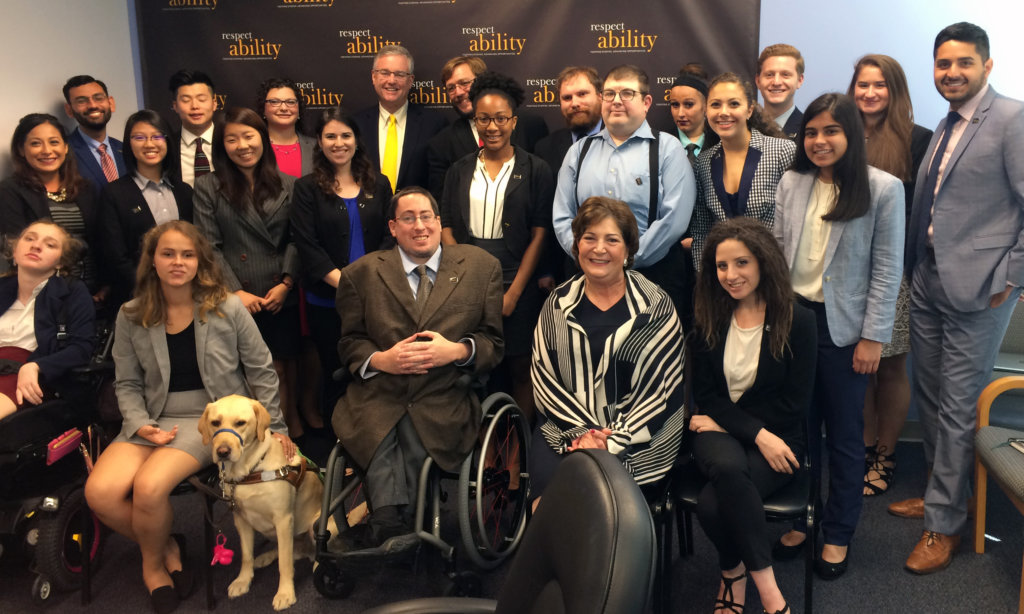 Rockville, Md., July 25 – David Trone, the founder and owner of Total Wine & More strode into RespectAbility’s office along with his assistant, Eric. Trone shone coming down the hallway with a bright canary yellow tie and a full head of glistening salt and pepper hair, a little more salt than pepper these days. As Trone made his way to his seat at the head of the table, he personally greeted RespectAbility fellows and staff.

Trone and his brother, Robert, created the largest U.S. alcohol retailer more than 25 years ago. On July 10, 2017, he joined RespectAbility Fellows and staff to share his advice on leadership, philanthropy, service, and his nephew’s struggles with opiate addiction and the impact on his family. Recently, following his nephew’s overdose, Trone published an important and potentially life-saving op-ed on the opioid crisis.

Leadership and emerging leaders have become passions of the Trone brothers in recent years.

“We have to recognize each person’s skills and what they can offer to society,” Trone said. “We are all leaders in different ways, not just the captain of the football team. Each person can offer their own perspective to help move us all together in society as a team.”

We have to respect each person’s perspective and empathize with him or her, Trone continued. He firmly believes that empathy, a critical leadership skill, means: What does it feel like to walk in someone else’s shoes? Can you respect me and my lived experience?

Having performed all types of duties at Total Wine & More, Trone is especially able to appreciate the struggles of his employees. The Trone brothers offer employees fulltime positions with full benefits including retirement, health care, parental leave, and short term and long term leave options. He spoke about hiring a young man with Autism, and his pleasure in enabling that individual to advance his life goals.

As Trone expressed his advice on empathy, it was easy to connect it with the work of RespectAbility in the disability advocacy arena. Without empathy for each person and respect for his or her skills, the movement will struggle to accomplish its full potential.

As Trone continued talking about leadership, it became evident that he ascribed to Adam Grant and Sheryl Sandberg’s leadership theory: the power of grit and resilience. Trone grew up on a farm in rural Pennsylvania. During that time, his family struggled to keep the farm running and to make ends meet. That personal struggle and ultimate failure as the bank took their home and farm taught Trone and his brother Robert the necessity to learn from failure at an early age.

This struggle continues. In a year where Trone narrowly lost the Democratic primary in Maryland’s eighth congressional district and subsequently lost his nephew to the opiate epidemic on December 31, 2016, he has shown great resilience exemplified by continuing his work in the community. Since then he has continued his commitment to criminal justice reform, various nonprofit organizations and other civic engagement.

Emma Adelman is a Program Development & Fundraising Fellow. In addition to her development work, Adelman manages the organization’s Twitter account and contributes to the Born This Way #BTWchat Twitter chats. She is a graduate of Mount Holyoke College.

Previous: Listening is an Act of Compassion

Next: Leaving Life in a Better Place Than We Found It