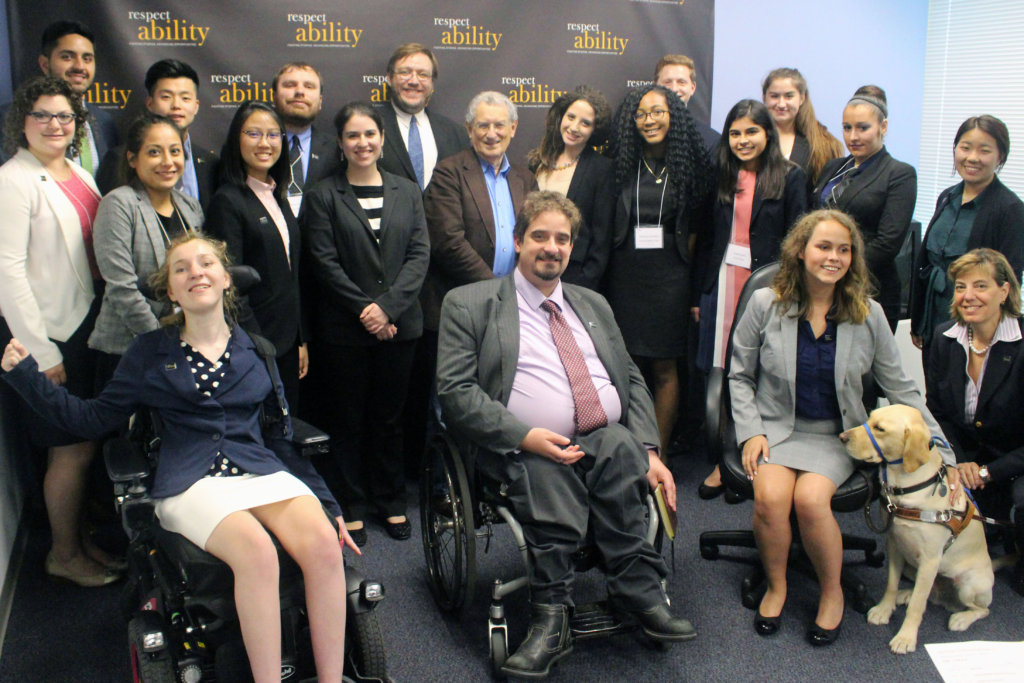 Rockville, Md., June 30 – As the Fellows in RespectAbility waited in the conference room for a leading pollster to enter the room, the intimidation increased after being told how important this person is.

Stanley B. Greenberg is a world-renowned pollster and New York Times best-selling author. He is known for advising business leaders with a broad knowledge of social and modern economics, along with being a polling adviser to presidents, prime ministers and CEOs globally. He has conducted deep research in more than a dozen countries.

Greenberg visited the RespectAbility office to meet with the Fellows. He previously teamed up with the organization by conducting polling on voters with disabilities in comparison to voters without disabilities. He also conducted a focus group with Republicans who work on Capital Hill and what they know about people with disabilities.

This summer, RespectAbility Fellows will be conducting one-on-one interviews with various stakeholders in three teams: philanthropists or people who work in entertainment or employment in Hollywood and Long Beach, California to learn more about attitudes toward people with disabilities and the stigmas this community faces.

I am part of the Communications team working on diversity and inclusion in Hollywood. My team’s goal will be the increased accurate representation of characters with disabilities and the inclusion of entertainers in Hollywood with disabilities both in front of and behind the camera. About 20 percent of Americans have a disability and just two percent of characters on network television have a disability. Furthermore, a person without a disability plays a character with a disability more than 95 percent of the time. Greenberg advised us on best practices in conducting an interview with a member of the entertainment community.

One question he suggested we ask is: What will it take for you to include people with disabilities in shows as empowered, capable individuals?

“Create an environment where people will be comfortable talking to each other,” added Greenberg. He stressed the importance of gaining people’s trust and respecting them, which includes reserving judgment on their opinions.

The interview should last no more than 45 minutes with at least 12 questions.

As a RespectAbility Fellow, I enjoyed learning from Greenberg, who was inducted into the American Association of Political Consultants’ “Hall of Fame” in 2010. He is known as “the father of modern polling techniques,” “the De Niro of all political consultants,” and “an unrivaled international ‘guru.'”

Marisela Rivera is a Communications Fellow. She is a first-generation Latina graduate from The City College of New York. She is an environmentalist who is an animal rights and disabilities rights advocate.

Previous: Mindfulness and its Impact to Create Change