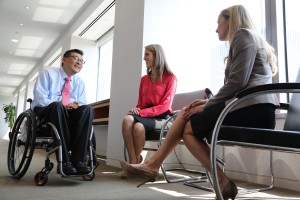 #RespectAbility campaign spotlights model employers that demonstrate how hiring workers with disabilities benefits the employer, the employee and society

Washington, Sept. 30 – RespectAbilityUSA is launching its 2015 #RespectTheAbility campaign in honor of National Disability Employment Awareness Month, which begins tomorrow. The campaign highlights the benefits companies reap when they hire talented people with disabilities. Using the hashtag #RespectTheAbility, the campaign hopes to ultimately erase negative and untrue stigmas associated with hiring people with disabilities.

“Many companies hire the best talent out there, no matter what package that talent comes in,” said Jennifer Laszlo Mizrahi, president of RespectAbilityUSA. “Employers’ focus should be on the abilities an individual brings to the table to better the organization, not any disabilities the individual may have. It is time for all employers to look beyond the disability, and understand the true value of these employees.”

The campaign comes on the heels of the U.S. Business Leadership Network (USBLN) and the American Association of People with Disabilities (AAPD)’s first Disability Equality Index (DEI) naming 19 companies as DEI Best Places to Work. Developed by the DEI Advisory Committee, a diverse group of business leaders, policy experts, and disability advocates, the DEI is a national, transparent benchmarking tool that offers businesses an opportunity to receive an objective score, on a scale of zero to 100, on their disability inclusion policies and practices.

The #RespectTheAbility campaign began in August 2014 with a focus on Ernst & Young LLP as a case study and featured a conference call with Lori Golden, Abilities Strategy Leader from Ernst & Young, on “Disabilities to Diverse Abilities: Changing the Workplace Paradigm.” Now, the 2015 campaign is launching, with a focus on the top DEI-rated national companies like AT&T, Comcast NBCUniversal, Procter & Gamble, and Starbucks. In addition, the campaign will highlight regional and statewide companies with a strong culture of hiring people with disabilities in several of the early primary states in partnership with their state Vocational Rehabilitation Services. RespectAbilityUSA will be releasing new stories highlighting best practices throughout the month and beyond.

“With the new passage of the Workforce Innovation and Opportunities Act, every governor must have a plan for expanding employment for people with disabilities by March of 2016,” Mizrahi said. “RespectAbilityUSA is working with a broad range of disability organizations and experts to promote best practices on this front. We are at the intersection of hope and history. Now is the time for public-private partnerships to flourish so that people with disabilities can have jobs, just like anyone else.”

Previous: The Best-and Worst-States for Workers with Disabilities